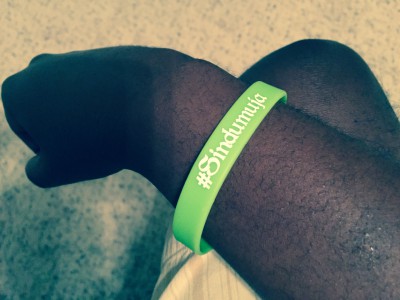 One year ago, I was just a random Burundian citizen – not an “opposition blogger” like a few people have been calling me since the crisis begun. I was a blogger, and although (like any respectable Burundian) I spoke and sometimes wrote and tweeted about politics, they were never my main area of focus. I’m the guy who would be blasting music on the radio while everybody else was busy listening to the News on RPA at 1PM. Listening to Burundian News depressed me. I still don’t listen to the News. I read whatever catches my attention online (I’m very picky with the sources), but I never put time aside to listen to Inzamba or Humura. Those clips never even land in my messages – I guess my friends know me well. But anyway, whenever something major happens, it always finds its way to my ears, since that’s all every Burundian will be talking about… and of course, these days everybody expects me to know about all that happens. It’s funny.
I’m the guy who can’t tell who is Pascal Nyabenda from the other guy, what’s his name, the President of CNDD-FDD? I don’t know who the “Second Vice-President” is and I can’t tell you the name of any “Minister” (the use of quotation marks is to express my conviction that all the current institutions are illegitimate). When Ikurakure died and everybody was talking about it, I was like, who is that and what makes his death such a big deal? Some people couldn’t believe me: how can I not know Ikurakure? I’m clueless – definitely not the right guy to call “an opposition blogger”.

When the protests started and journalists from all over started contacting me asking for interviews I didn’t want to do it – I felt like I wasn’t the right person to ask about what was happening. I actually contacted a few people, who I knew were more knowledgeable, asking if they could talk instead, but they didn’t want to. But then at the same time, others were telling me that I should do it. So I figured, what the hell, aren’t I the one who’s always saying “Africans should tell their own story”? I convinced myself to do it, but to limit my interventions to what I saw… the facts. I told myself that if they asked for an opinion I would give them MY opinion… ariko ntihabure uwuvuga ndi ngaha. And that’s what I did.

I’ve never considered myself “an opposition blogger” because, although I am against the current system, I’ve never been a fan of the opposition either – the old or the current one. But somehow, being labelled an “opposition blogger” almost made me lose focus to the point of believing that I was some sort of opposition spokesperson. I guess it’s the whole Sindumuja movement that blurred my understanding… making me believe that anybody who is against the system, is a Sindumuja.

The core of the Sindumuja spirit is a refusal to be a slave – a slave to a dictator, a slave to “leadership”, decisions and policies that restrict our rights and responsibilities as Burundian citizens. I am not a slave!
Yet, from the very first days of the anti-third term protests, I began to notice aspects of the Sindumuja movement that weren’t quite inspired by the Sindumuja spirit… like forcing citizens (sometimes threatening them) to stay at home instead of going to work and to school “as an expression of support to the protest movement”. I know people who stayed at home voluntarily (although they were actually supposed to take the streets and protest), but others were harassed to stay at home, sort of making them slaves of the Sindumuja movement. How ironic.
I didn’t say much about this as I felt like there were more important things to worry about. There were: innocent people were getting arrested, tortured, killed… in broad daylight. I figured those people who stayed at home, even though forced to, were better off being within the safety of their houses and not on the streets where they risked so much. And anyway, the coercion was just a means to an end: soon everything would be over and people would be able to return to their daily routines with all the freedom in the world. Ewe kuba naïf!

The “opposition blogger” label has earned me some open doors, and a lot of insight into the Sindumuja side of my world. Recently, I heard and saw things that acted as a trigger, as a wake up call reminding me why I am Sindumuja in the first place, and how I could be slipping into a dangerous path if I’m not careful…
Extremist ideas, exclusionary mindsets and messages that are popular in Sindumuja circles and which will only change the players not the game, if we one day manage to kick Nkurunziza and his system out. As if the movement “belongs” to some people and not others… And so many unanswered questions… like who are these rebel groups we hear about? Why are they so many when there is just one cause? Who is responsible? What are their objectives? What do they need our money and support for? Are they responsible for some of the attacks that have claimed civilian lives? What’s the post-Nkurunziza plan? Is it inspired by the Sindumuja spirit or are they just going to make us… their slaves?
And then there is the story of how I was recently accused, by lunatic “Sindumujas”, of being pro-Nkurunziza, for reasons that really have nothing to do with the whole “third term struggle”. This didn’t really bother me though – I’ve dealt with the lunatics before. What bothered me was when I talked about it to other “Sindumujas”, whom I considered as reasonable, but their reactions showed me they agreed… with the lunatics. Ni hatari.

For a while now, I’ve been asking myself whether or not I should share all this. I mean, I could have just kept it to myself. Besides, sharing this means that some of the doors I just told you about will be slammed in my face. I will be called a snitch, Haha! But it doesn’t matter. I think what matters most, at a personal level at least, is to clear the air around me once and for all:

I am NOT an “opposition blogger”!
I’m just a random citizen who wants to live his life in peace, without constant fear for his life, and without restrictions and stigma associated with being born in a certain community. I just want a good life, the respect and attention I deserve as a citizen, a fair access to opportunities, and to know that the taxes I pay are being used effectively and efficiently. Is that too much to ask for? I am not, and will never be anybody’s slave, whether they support Nkurunziza or not. THIS makes me a real Sindumuja, and I am proud! HOWEVER, when I see bullshit, I will call it out, regardless of which side of the “third term” it comes from, today or at any point in the future – I owe it to myself, and to anybody who actually reads and takes my ramblings seriously. We are NOT anybody’s slaves!

Do I think the Sindumuja movement will die because of its flaws? Certainly not! Every organisation, every movement has toxic weeds that need to be weeded out before it can grow up and prosper. Most toxic weeds take the form of ideas and behaviours that need to be changed; and it is our duty as citizens, as real Sidumuja, to make sure that this time, THIS TIME we will leave the dirty weeds behind as we move towards the Burundi we want to see!
Ask questions! Set reasonable standards! Demand accountability! This is the only way we can be sure that nobody will ever try to enslave us again. Because really, sinzi nkamwe, but I am tired of these political games. I seriously cannot take another cycle of this nonsense!